With their distinctive spotted coat, there’s no mistaking the Dalmatian for a solid Pantone. In addition to those famous mottled markings, they are lively, loyal and active dogs who enjoy nothing more than a good long walk with their owners. One word of warning: they have a fondness for water and will make a beeline for muddy puddles, so keep a close eye on them if you wish to avoid your own coat being covered in spots.

* We advise against leaving pets alone for long stretches. Companionship can prevent emotional distress and destructive behaviour. Speak to your veterinarian for recommendations.

Every pet is different, even within a breed; this snapshot of this breed specifics should be taken as an indication.

For a happy healthy and well-behaved pet, we recommend educating and socializing your pet as well as covering their basic welfare needs (and their social and behavioral needs.

Pets should never be left unsupervised with a child.

All domestic pets are sociable and prefer company. However, they can be taught to cope with solitude from an early age. Seek the advice of your veterinarian or trainer to help you do this. 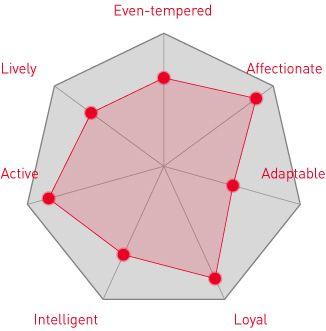 Get to know the Dalmatian

Immortalised in the animated Disney classic, 101 Dalmatians – how could we not mention it? – these beautiful animals make great canine companions. Energetic, affectionate and playful, Dalmatians have a lovely temperament and form close attachments to their human families. With their short, smooth coats, which come in either a black or liver colouring, they are also easy to take care of grooming-wise.

As accomplished sporting dogs, however, Dalmatians do need a decent amount of exercise each day. Got some well-worn running shoes? A Dalmation might just be your perfect jogging partner then. Long walks work too! In any event, with their athletic and muscular frames, the Dalmatian needs high levels of activity to keep them happy.

Originally thought to hail from Croatia, where they were used as hunting dogs, Dalmatians were later imported into Britain. There, they were utilised as coach dogs. It was here that the breed was also formally recognised, in 1890, with the creation of the first Dalmatian Club.

In another interesting chapter in their story, the Dalmatian went on to become synonymous with the fire service – especially in the US where they are an official mascot for the brigade to this day. Because of their background as coach-leading dogs, Dalmatians were used to guard the horses that would pull the fire carts. Even now, many firefighters choose to have a Dalmatian as a pet.

In more recent years, the Dalmatian experienced a huge spike in popularity thanks to their forays on the silver screen. As well as the 1961 Disney film, which was itself adapted from the novel of the same name by British author Dodie Smith, there were various other later spin-offs.

Sadly, though, this also meant that many Dalmatians ended up with inexperienced owners, who bought them for their children, with little idea of how to look after them. Thankfully, that situation has now abated – and, with the right care and plenty of exercise, Dalmatians are thriving in family homes across the world.

Did you know that Dalmatian puppies are born without any spots at all? They only start to get their distinctive markings at around 10 days old. Their spots can continue to change shape until around the time the Dalmatian becomes an adult.

Pongo, the Disney Dalmatian, actually existed! He was one of nine dogs belonging to the British author, Dodie Smith, who wrote the book that inspired the film. The novel itself, from 1956, is also a great read for Dalmatian fans – or, indeed, dog-lovers of any kind.

Despite their latter-day stardom, the origins of the Dalmatian remain somewhat shrouded in mystery. While many claim they come from Dalmatia, in the Balkans, there is little evidence to support this theory. Nonetheless, it is generally agreed that they did come from Croatia originally and were later brought over to Britain.

What we do know for sure about the Dalmatian’s history is that, in the late 18th century, there was a type of white spotted dog known as the Talbot Hound. These animals were used to accompany horse-drawn coaches to guard the animals, the passengers and the goods. At night, they would also act as a watchdog for the stables. In 1791, the English author Thomas Bewick named this type of dog as ‘the Dalmatian’.

That said, they were known by a host of nicknames, too, ranging from the English Coach Dog to the Spotted Dick and the Plum Pudding Dog. The latter two were because the Dalmatian’s famous spots were thought to resemble the pieces of fruit in these popular British desserts.

During the 1800’s, the breed went on to become something of a status symbol among the nobility – while also being the favoured choice for Romani travellers. It was around this time that the Dalmatian’s long association with the fire service began, too. They were recognised by the American Kennel Club in 1888.

The tail is in proportion with the body and tapers gradually at the end.

Head is long and flat with floppy ears and bright, intelligent eyes.

Colouring is pure white with either black or liver spots.

From specific breed traits to a general health overview, here are some interesting facts about your Dalmatian

One possible yet common problem in Dalmatians: deafness

Sadly, more than 15% of dogs are affected to some degree – with prevalence as high as 30% in the US, according to some estimates. Around 5% are deaf in both ears. As well as the obvious risk of injury from accidents, it can also make it harder to train them, though certainly not impossible. In fact, because they are bright, they can easily learn sign language if their owner is willing to invent it. Linked to a gene in the Dalmatian’s piebald colouring, the condition is hereditary. However, reputable breeders will always check for hearing loss in the potential parents first, which can reduce the chance of it occurring in the litter, and the puppies themselves can be tested too. Thankfully, Dalmatians with only partial hearing loss can get by just fine and live a fairly normal life.

Another thing to watch out for is bladder or kidney stones

Although a typically healthy breed of dog, with a pretty good lifespan, Dalmatians can be prone to some complaints. One of these is a condition called hyperuricosuria – where elevated levels of uric acid in their urine can lead to the formation of bladder/kidney stones. However, the good news is that a carefully managed diet can go a long way towards prevention (see our ‘Healthy Diet, Healthier Dog’ section for more on feeding your Dalmatian). Also, if stones do develop, they can be removed through methods such as lithotripsy (ultrasonographic breaking of the stones). As a last resort, surgery is an option too. With the help of your vet, you can get a head start on possible treatments.

For their mental and physical well-being, Dalmatians need plenty of exercice

While all dogs require a certain level of daily activity, this is particularly important for the Dalmatian. With their sporty, agile bodies and working heritage, they thrive on outdoor physical exercise – and, as highly intelligent animals, they need the mental stimulation too. Kept confined for too long, this can lead to excess energy and, potentially, destructive behaviour in your Dalmatian. This, in turn, will lead to both an unhappy dog and owner. So, regular long walks – and ideally runs – are vital to their overall well-being. For more helpful facts on the Dalmatian’s exercise and training, check out the relevant sections below.

Caring for your Dalmatian

If you’re wondering how much exercise a Dalmatian needs, they may not be the right dog for you – because the answer is a lot. Ideally, they should have one to three hours a day – or even more when possible. A Dalmatian that doesn’t get enough physical activity may well engage in destructive behaviour to get rid of their pent-up energy. With their background as hunting dogs, they like nothing better than tearing through the countryside – so, for anyone who enjoys hiking, running or even cycling, they make great exercise buddies. As the Dalmatian also has a playful streak, they respond well to games in the garden too.

Not only is the Dalmatian blessed with a beautiful coat, but their fur is relatively easy to maintain. A good brush once a week, with a rubber curry comb, is typically all it takes to keep them smooth and shiny and remove loose hairs. For the full Dalmatian grooming experience, the occasional bath is also recommended and their nails should be trimmed as often as necessary. Like all breeds, attention does need to be given to their dental hygiene. As well as daily teeth-brushing at home, they should have regular check-ups. Finally, the Dalmatian’s ears should also be monitored for any sign of debris or infection.

Both intelligent and eager to please, the Dalmatian’s personality traits make them a pleasure to train. However, as they are also quite sensitive animals, they respond best to positive, reward-based training. It’s best to get them into good habits from the start by taking your Dalmatian to puppy training. They will also benefit from this early socialisation as they can be suspicious of strangers and even a little shy. On the other hand, they can occasionally show signs of aggression around other dogs, so classes are a good idea all round. Even if they are hearing impaired, they can still be trained using hand signals or vibrating collars. Later, you may wish to continue your Dalmatian’s training with agility or obedience classes.

As a rule, Dalmatians are generally very docile as a breed and rarely show signs of aggression. However, they can be a little reserved with strangers and will occasionally assert their dominance over other dogs. As they are also very energetic and playful animals, Dalmatians will do better in a household without small children around.

It depends very much on the lifestyle that you have. If you like walking and/or jogging, you and your Dalmatian will get along just fine. If, however, you are more of a homebody, you may be better off having a smaller-size dog (the full-grown Dalmatian can reach around 24 inches or 61cm) that also has lower energy levels.

A guide to changing your dogs food

How your dog's diet affects their skin