Known for their playful and friendly nature, Boxers are full of bouncy exuberance. A little boisterous at times, they have an abundance of energy and a great zest for life. With early training, Boxersalso make loyal and devoted companions, and develop a deep attachment to their human families. Really deep. In fact, they like nothing better than being right by your side –and will even fall asleep on your knee, if you let them.

* We advise against leaving pets alone for long stretches. Companionship can prevent emotional distress and destructive behaviour. Speak to your veterinarian for recommendations.

Every pet is different, even within a breed; this snapshot of this breed specifics should be taken as an indication.

For a happy healthy and well-behaved pet, we recommend educating and socializing your pet as well as covering their basic welfare needs (and their social and behavioral needs.

Pets should never be left unsupervised with a child.

All domestic pets are sociable and prefer company.  However, they can be taught to cope with solitude from an early age.  Seek the advice of your veterinarian or trainer to help you do this. 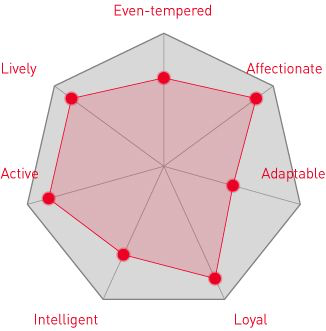 Get to know the Boxer

Renowned for their boundless energy, Boxers have a friendly and fun-loving temperament with an enthusiasm for just about everything around them. There’s just so much to be excited about in life – or at least that’s their excuse and they’re sticking to it.

But they are also a very gentle, affectionate breed of dog who form strong bonds with their owners. Also good with children once they’ve had a bit of training, Boxers are normally very careful and respectful to those around them. As they can sometimes be a little more boisterous than they intend, though, it’s best to keep very little ones away – just in case – but otherwise they are renowned for being a very trustworthy dog.

Protective and loyal as a breed, Boxers will bark fearlessly at anything they perceive to be a threat to their human pack. Even if they are more likely to lick a stranger than anything else. They make good watchdogs, nonetheless.

Originally descended from hunting dogs in Germany, where they would help to pin down prey, Boxers were later crossed with a smaller, mastiff-type breed from England. The name stems from the way they spar with their front paws – literally like a fighter – when playing. This does mean they can be a bit prone to jumping up, but training can help.

In terms of their appearance, Boxers have a short, sleek coat, distinctive blunt muzzle and intelligent, dark-brown eyes. As their colouring can range from a dappled brindle to a rich red to pure white, every dog has a distinct look of their own. With their muscular, athletic build, they also have a graceful, powerful movement.

On that note, it’s important to be aware that Boxers need at least two hours of exercise a day. They will also benefit from some training classes early on in their lives to help keep that bouncy Boxer buoyancy in check. But as long as they have those two things, along with plenty of affection from their owners, Boxers will reciprocate with great devotion. It’s not for nothing that they are regarded as one of the most perfect family pets.

One of the many interesting facts about Boxer dogs is that they have one of the longest puppyhoods of any breed. Although they are classed as an adult from around 15 months, it takes them about three years to reach full maturity. So, perhaps it’s no surprise they retain their youthful enthusiasm for life.

Not commonly known is that there are actually two types of Boxer dogs. As well as the standard Boxer breed, there is an American variant that has slightly different physical characteristics. For example, the body of the American Boxer is less bulky, with tauter lines, and the neck is more arched. Also the muzzle and ears are both slightly longer in the American.

It’s hard to believe that the Boxers we know and enjoy today have their origins in ferocious hunting dogs. And yet, if we explore their history, that’s exactly what happened.

Originally descended from the old fighting dogs of Tibet – to go back to their very distant roots – the Boxer dog of today hails from Western Europe. To pick up the story, we need to visit the Germany of the 1800’s where we meet the Bullenbeisser (‘bull biter’) dog. Used by the German aristocracy to chase and pin down hunting prey, these hardy animals tackled everything from deer and boars to bears.

Later, as times changed and estates were broken up, traditional hunts fell out of favour. In fact, for a while, things looked a little precarious for the Bullenbeisser. But then everything changed when they were crossed with a smaller, mastiff-type breed from Britain – and, by the late 1800’s, we had the first modern-day Boxer dogs.

In 1904, the breed was registered with the American Kennel Club. There, they went on to become one of the most popular dogs in the country – and frequently appear in lists of ‘top 10 breeds’ to this day.

Back in Germany, meanwhile, Boxers were one of the first breeds to be used by police – and they were also enlisted by the military during both World Wars. Today, despite their tough-guy origins, the Boxer dog is regarded as one of the friendliest breeds around.

From specific breed traits to a general health overview, here are some interesting facts about your Boxer

Caring for your Boxer

With their seemingly limitless energy, Boxers need at least two hours of physical activity a day. Yes, two. This can be spread between regular walks, playing in the garden or a run in the park. In fact, they are a perfect breed for those looking for a jogging partner. In any event, daily walks are preferable to one long run at the weekend. Also, with their playful personality, Boxers enjoy games in the garden too. One thing to bear in mind is that Boxers don’t do well in hot weather. As a brachycephalic breed, they can sometimes struggle with their breathing. And remember to wait at least an hour after feeding before exercise.

With their short, glossy coats, one of the advantages of having a Boxer is the minimal grooming required. However, because they tend to shed all year long and their short prickly hair sticks to carpets and upholstery, a daily grooming/stroking with a glove will reduce the vacuum-cleaner use. They will only need a bath very occasionally – though be prepared for a bit of drooling. Like most breeds, Boxers’ teeth should be brushed regularly – daily if possible – and will require professional dental cleaning from time to time. Nails should be clipped as needed and ears checked weekly. Other than that, they should be good to go.

With the Boxer’s naturally boisterous nature, and tendency to jump up, early training is a good idea. Puppy classes are a helpful part of the socialisation process – especially as male Boxers in particular like to show other dogs who’s boss, so this can improve their tolerance towards other canines. Intelligent and keen to please (for the most part anyway!), Boxers learn quickly and respond well to gentle encouragement. They will also benefit from the continued mental stimulation, too, as boredom can lead to destructive behaviour such as chewing. On that note, they don’t deal well with being left on their own. Boxers make great therapy dogs too.

Despite their fierce heritage as fighting and hunting dogs, Boxers are gentle souls with a friendly, affectionate nature. They can be highly protective of their owners, but, in this case, their bark really is worse than their ‘bite’. In fact, it’s very rare for a Boxer dog to bite anyone.

Although they have a reputation for playing the clown a bit, Boxers are actually highly intelligent dogs that will benefit from plenty of mental stimulation. They also enjoy human company and thrive under the spotlight of attention. The more time and energy you invest in them, the more you will get back.

Things to consider before getting a dog