The dignified, sophisticated and, yes, fluffy Persian wins hearts the world over as one of the most popular cat breeds. Could it be the adorable muzzle? The lustrous fur? The subtle demeanor? It’s all of the above with this medium-size cat, who graces any household with quiet grandeur and fulfills their unofficial role as lap cat extraordinaire, preferring a quiet home to a bustling busy one. 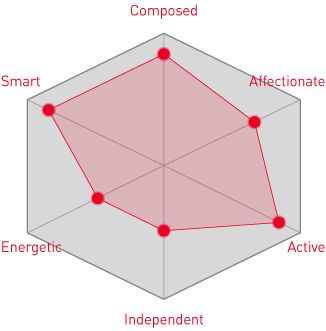 Get to know the Persian

Sweetness and light, the Persian is a downright delightful cat. Super soft fur, big lion paws, and the merest “eek” of a meow makes them one attractive feline. The breed is overtly calm, and not one to enjoy change of any sort, they are domestic sorts in every way, shape, and form.

An ancient breed, the history of the Persian cat is one that has stood the test of time. They hail from Persia (go figure), now Iran, and since the 1500s have seen their popularity spread across the globe: At present, there are more than 200 Persian varieties worldwide.

The breed is hugely popular in France, their regal appearance making a parfait accompaniment to sophisticated French culture.

As flocculent as the Persian cat may be, they don’t enjoy being fussed over and don’t, at times, like to be hugged. And they will let you know. It may be hard to keep your paws off them, but they are an independent sort and will cuddle on their own terms. Docile and pretty easygoing, Persians are fine being left at home while you’re out tending to their kingdom.

1. Despite hailing from Persia...

Excessive heat is an issue for Persian cats. Logic would dictate that this is so, given the breed’s luscious locks, but the breed does best kept indoors out of excessive sun.

According to the Cat Fanciers Association, North America’s premier cat club, Persians are the most popular breed in the United States and rank fourth overall in the world. The breed itself is not surprised.

Sophisticated, wise, confident - the Persian cat is all of these and more. Persians were discovered by the 17th Century Italian adventurer Pietro Della Valle who first saw the cat in Persia, now modern-day Iran, and brought the cat home with him to Europe.

The breed’s popularity spread throughout the continent upon their return in the early 1600s, and breeding ensued to preserve the iconic long hair of their coat and the breed’s overall statuesque appearance. King Louis XV was quite fond of the breed, introducing it to the royal court in France in the 1700s.

The Crystal Palace cat show, held in London in 1871, further gave rise to the breed’s popularity as Queen Victoria, the monarch at the time, was hugely fond of the Persian personality.

From years of breeding, the hugely cherished Persian changed from their original appearance to their present one. For years, the breed had only shiny, silky, gray fur but the first of two genetic changes occurred in 1882, producing the Chinchilla coat, the very popular white with flecks of gray (the breed now comes in a wide array of coat colors and combinations). In 1942, another genetic change happened and the brachycephalic face emerged - a flattened appearance that has become the beloved breed we know today. The snub nose is charming for breeders and fans, but its development proved difficult for the Persian cat’s health when it comes to breathing and respiratory issues.

From specific breed traits to a general health overview, here are some interesting facts about your Persian

They are prone to kidney disease

A Persian’s health is generally robust but like all cats, Persians have certain maladies that are a concern; for them, it’s kidney disease, which can come in the form of polycystic, or many cysts that form inside the organ. The condition is said to occur in one out of every three Persian cats. It is very treatable with the right veterinary care, proper diet, and a decent amount of exercise for your feline.

Climbers they are not

A Persian’s favorite pastime is accompanying you on the couch and watching the world go by as opposed to jumping, climbing, and scaling to new heights around the living room. Although they do like to play as much as the next cat, they much prefer the passive comfort that furniture provides rather than dashing to and fro. Running for Persian cats is somewhat foreign; walking, preferred. After all, they hardly have to prove themselves.

That elegant button nose is great to look at but also causes breathing problems for the Persian. The breed possesses what’s called a brachycephalic face, or one that’s shortened in length, giving the face and nose a pushed-in appearance. While the genetic snub nosed-change is one of the breed’s most beloved traits for breeders and fans, it can prove difficult for Persians as it relates to breathing and respiratory issues.

Caring for your Persian

The Persian cat needs a good amount of activity each day like any feline and playing with your cat will promote this. Cat toys are sold in abundance. Jingly balls and things that scatter about will keep your frisky friend moving and keep the blood flowing for optimum health. Truth be told, Persian cats do enjoy their downtime tremendously but getting their daily gymnastics in is important to keep them fit and trim.

How to groom a Persian cat? Very diligently. The breed is celebrated for their signature long hair but make no mistake, effort must be put in to keep it looking great and keep your cat healthy. To start: a daily run-through with a comb for your Persian. Doing so will keep mats and tangles under control. Monthly bathing should be given as well so both the silky topcoat and downy undercoat stay rid of harmful dirt and germs, making sure to dry and comb thoroughly afterwards. Brushing the Persian coat backwards will help evenly distribute its natural oils. Of course, trimming your Persian cat’s nails as often as is needed will keep them healthy as well.

Training your Persian cat is a breeze, given their incredibly affable nature. This is a breed that likes to please so understanding and following commands is easy for her. Litter box, meal allowance, leave the sofa alone - they will understand it all if patient and gentle discipline is instilled. The breed is very responsive so following what you say won’t be a huge issue.

Purrrfect!! The breed is everything they appear: Snuggly, friendly, affable, and always up for a chase after a toy or a tasty treat. Persian temperament is top-notch. Call them your domestic goddess with their sweet stare and accessible behaviour.

If a Persian cat won’t sit on your lap, no cat will. Persians are very friendly and known to be tender and dear. This breed will never have trouble showing their soft side.

Tailored nutrition for your Persian