A gentle giant of the feline world, the Norwegian Forest Cat is friendly, easy-going and often quite playful. This makes them an ideal breed to have around children. Unlike some cats, they form strong attachments to their human families and are also known to be quite affectionate. Then there’s the Norwegian Forest Cat’s impressive stature, voluminous coat and, thanks to those tufted ears, almost lynx-like good looks. Originally from Northern Europe, as the name suggests, they are well suited to colder climes. 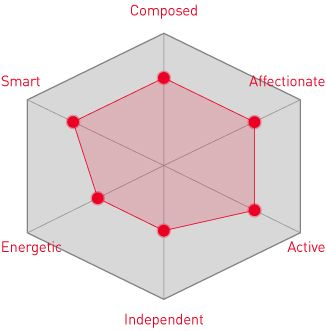 Get to know the Norwegian Forest Cat

With a name that’s straight out of a fairy tale, the Norwegian Forest Cat more than lives up to its billing. Known for their almond-shaped eyes, impressive size and lustrous coat, they could indeed be a character in a storybook and look more like a wild animal than a family pet.

Funnily enough, though, while it’s true that they hail from the Norwegian forests after which they are named, the Norwegian Forest Cat may descend originally from domestic cats. In fact, it is widely believed that their ancestors were household pets of the Norwegian Vikings. Later, the breed went on to become established in the wild Nordic woodlands, gradually becoming more feral and growing their longer, thicker coat to cope with the harsh Scandinavian climate.

Today, while they remain a hardy, robust and self-assured animal, the Norwegian Forest Cat also has a lovely, sociable temperament that belies their background. As such, they can get on well with children and other pets – and even with dogs sometimes.

As one of the largest breeds of domestic cat, a fully grown Norwegian Forest Cat can reach a top weight of around 20lb (9kg). A strong, powerful and agile animal, not unlike the Maine Coon, they are exceptionally good at climbing due to their muscular bodies and strong claws. The Norwegian Forest Cat is also one of the only breeds to like water, thanks to their water-shedding hair, so watch out if you have a fishpond – and they may even try to jump in your bath!

While it’s true that they are best suited to an outdoor lifestyle, they can adapt well to life indoors as long as they have plenty of toys and activities to keep them occupied. A highly intelligent breed with a playful personality, Norwegian Forest Cats are very interactive animals who also enjoy games with their owners. The Norwegian Forest Cat has a good life expectancy, too, reaching an average age of 14 to 16 years.

Increasingly popular over the years, they were designated the official cat of Norway in the 1950’s. Nowadays, Norwegian Forest Cats feature among the 20 most popular cat breeds in the world.

According to Norse folklore, the Skogkatt (to use the Norwegian Forest Cat’s native name) was a “mountain-dwelling fairy cat”. Legend has it that they had the ability to climb sheer rock faces that other breeds could never pull off.

The Norwegian Forest Cat has a coat of potentially many colours – from chocolate to sable and lavender. But did you know that a unique colour has been identified in the breed? Proven by DNA testing, this is an amber that appears in two different shades.

Although the precise origins of the Norwegian Forest Cat are not known, it is thought that their ancestors were brought over to Norway by the Vikings around 1,000AD. While many believe that today’s breed descends from a short-haired variety in Great Britain, they may also have their roots in the Siberian and the Turkish Angora – both long-haired cats – from Russia and Turkey respectively.

In any event, over the years, colonies became established in the Norwegian forests and eventually adapted to the cold, harsh climate there. Later, they were utilised for their hunting skills by local farmers, to keep the local mouse populations in check, but didn’t become established as a domestic pet until relatively recently.

The Norwegian Forest Cat was finally registered as a breed in Europe in the 1970s. However, it wasn’t until 1989 that they were accepted as a breed in the UK. Now, they are a highly popular breed of pet cat across Europe and beyond – but especially in their native Norway and in France.

From specific breed traits to a general health overview, here are some interesting facts about your Norwegian Forest Cat

That way, you will significantly reduce the risk of any hereditary conditions. For example, although it happens only rarely, the Norwegian Forest Cat has a genetic predisposition to a neurological disorder known as ‘glycogen storage disease IV’ (or ‘Andersen disease’). This can occur at birth, with some kittens being stillborn, or it can also manifest at five to seven months with progressive decline. Fortunately, a DNA test can be carried out to establish if a cat is clear, so good breeders will be screening for the condition in the parents in order to reduce the risk. If buying a Norwegian Forest Cat kitten, be sure to check with your breeder about this.

Their teeth need some careful attention too

Like other breeds, the Norwegian Forest Cat can be prone to gum and dental problems. This can occur when plaque on the teeth builds up and becomes mineralised leading to what is known as ‘tartar’. This, in turn, can result in gingivitis (gum inflammation) and periodontal disease (affecting the structure around the tooth). As a result, the Norwegian Forest Cat should have their teeth brushed as often as possible. Regular dental check-ups are also recommended and the right sort of diet can help too. For example, dry food will help remove dental plaque and calcium chelators can prevent the build-up of tartar (see our nutrition section for more on the best diet for your Norwegian Forest Cat).

Be sure to check their eyes regularly for anything unusual

Another thing to be aware of is that the Norwegian Forest Cat can be susceptible to eye complaints. For example, these can include conditions such as conjunctivitis, glaucoma and retinal dysplasia – the last of which can occur when the kitten is still in the womb or newly born. The important thing is to check their eyes regularly for any sign of discomfort or irritation and, if anything doesn’t seem right, have a chat with your vet who will be able to advise on the best course of treatment. They will also be able to offer regular check-ups for your Norwegian Forest Cat in order to head off any issues.

Caring for your Norwegian Forest Cat

With a top weight of around 20lb (9kg), the full-size Norwegian Forest Cat needs a fair amount of physical activity to keep them in shape. As a one-time wildcat, this is a breed that will also benefit from regular access to the great outdoors. However, if this isn’t viable – for example, if you live near a busy road – a good compromise can be an enclosed area in the garden where they can get the best of both worlds in a safe space. Either way, you will want to think up as many activities as possible for them to enjoy at home. As the Norwegian Forest Cat is a consummate climber, they’ll appreciate something to clamber up and down such as an elaborate cat tree with high platforms.

The Norwegian Forest Cat is a true stunner of the feline world, but their thick double coat of long, water-resistant fur does require a bit of care. They will need brushing at least twice a week – and daily during the moulting periods when they can shed a lot. As well as keeping the coat in good condition and avoiding tangles, this will help to prevent any foreign bodies, such as grass seeds, getting trapped in their fur and causing skin abscesses. The Norwegian Forest Cat should also have the corner of their eyes wiped daily, using a different cloth for each eye, and nails clipped as needed. Teeth should be brushed as often as possible and they should have regular dental check-ups.

Known for being a highly intelligent breed, the Norwegian Forest Cat learns fast. They can therefore be house-trained very easily. However, as this is a breed that takes a long time to fully mature, expect kitten antics for some time to come. They are even quite playful into adulthood. As such, they will also benefit from games and activities at home, as well as plenty of interaction with their owners. Although they like to have the company of their human families, and are usually great with other pets, the Norwegian Forest Cat can be a little shy around strangers. Selecting a kitten that comes from a breeder who practises early handling and socialisation can help with this.

All about Norwegian Forest Cats

There is actually no such thing as a “hypoallergenic” cat. The allergen that causes reaction in people is called ‘Fel d1’ and is produced in the glands. This is particularly present in their saliva, so, when cats groom themselves, they spread the allergen over their body. But it has nothing to do with the type of hair (i.e. long or absent) as such.