Regarded as the American forebearers of the US cat family, this popular breed was originally brought over from Europe in the 1600’s. Used by seafarers to control the rodent population on board the ships, the American Shorthair still retains something of that hunting instinct today (keep a close eye on your computer mouse…). Strong, agile and lively, they are also notable for their beautiful and highly varied colouring. Most of all, though, the American Shorthair makes an affectionate, gentle pet who will often form a strong attachment to their owners. 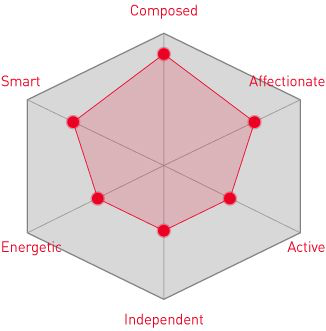 Get to know the American Shorthair

Renowned for their easy-going, relaxed personality, American Shorthairs are also quite a playful breed of cat. As such, they tend to be popular with families, especially as they are known to be good with children. Generally speaking, they also get along fine with other cats and dogs, too.

Originally brought to the US by early settlers in the 1600’s, these seafaring cats were used to protect the ships’ supplies from mice and other rodents. On their arrival in the US, they soon became a fixture in domestic homes – and were eventually adopted by the Americans as their own.

Medium in size, American Shorthairs are known for their beautiful and varied colours and markings. In fact, there are more than 60 variations in the breed. One of the most striking, though, must surely be the sterling silver coat, which can also be flecked with black markings.

This resilience comes in part from their origins as a self-sufficient hunting cat. In short, there’s not much that fazes this plucky puss.

While it’s true that the American Shorthair likes to play, they are also equally happy when curled up on the sofa. They are also just the right mix of independence and affection. Though they like to do their own thing to some extent, they also appreciate the attention and caresses of their owner with whom they can often form a strong bond.

It is thought that some of the American Shorthair’s ancestors may have travelled on board the ‘Mayflower’ herself. If that was the case then 2020 would have marked the 400th anniversary of the breed. So, many happy returns to this classic American cat!

Although they have long been claimed by the US as their own, the American Shorthair breed has its original roots in Europe. During the 1600’s, however, they were brought over by the adventurers who tried their luck on the high seas.

Back then, these early American cats were used to protect the ships’ precious stores and cargo from mice and rats. Strong and sure-footed animals, they had a keen intelligence about them too. They were also notable for the variety of colours and patterns in their coats.

On their arrival in the US, they were initially utilised by farmers and shopkeepers for their hunting skills. Before long, though, people also began to recognise their value as domestic animals. It was then that they became popular as family pets.

Later, in the 1800’s, there developed a sudden surge in showing cats. So, it was decided that there should be a representative of the breed. In 1906, official recognition as the ‘Domestic Shorthair’ was given.

Finally, in the early 1960’s, the breed was renamed the ‘American Shorthair’ that we know today. The icing on the cake came in 1965 when an American Shorthair was declared ‘Best Cat of the Year’ by the Cat Fanciers Association (CFA) – a title devotees would argue stands true every year.

From specific breed traits to a general health overview, here are some interesting facts about your American Shorthair

They can potentially suffer from heart disease

Although a generally healthy breed of cat, with an average lifespan of 15 to 20 years, the American Shorthair can be prone to a few possible health problems. One of the most common of these is a condition called hypertrophic cardiomyopathy – which is a thickening of the heart muscle. Symptoms can include rapid breathing, general fatigue and a disinterest in their food. While the disease unfortunately has no cure as yet, the good news is that it can be managed. Your vet will be able to advise on a combination of medication and a bespoke diet for your American Shorthair.

It’s important to keep their weight in check

Another thing to be aware of with the American Shorthair is their propensity to put on weight. As this is a trait that the breed is particularly prone to, they can easily become obese without proper exercise and an appropriate diet – and this is especially true for neutered cats. If your American Shorthair seems to be gaining weight, they may need a tailored nutrition programme. Have a chat with your vet who will be able to advise on this – and be sure to avoid any unhealthy treats.

They can also be prone to joint problems

In particular, the American Shorthair can be susceptible to a condition called hip dysplasia, a hereditary disorder where the ball and socket become misaligned. There can be various visible signs of this – for example, if your cat starts moving slowly, limping or avoids jumping. While the condition can’t be cured, it can be managed. Depending on the severity, weight management, medication and surgery can all help to alleviate the symptoms. Choosing a responsible breeder can also reduce the risk, as they will be screening for the condition in the kittens’ parents, and it’s important to keep your cat’s weight in check too.

Caring for your American Shorthair

With their laid-back temperament, the American Shorthair tends to have a fairly relaxed approach to life. However, this does mean they can be prone to gaining weight, if they don’t have enough exercise, which can have serious consequences for their health. One good way to keep your American Shorthair in shape is with daily play sessions together. This will help to ensure they burn off some calories. A cat tree can also provide a good source of activity and mental interest for them. Ideally, American Shorthairs should be able to spend some time outdoors, too, even if it’s in an enclosed space in the garden. Getting a kitty companion can be another way of making sure they get their quota of daily exercise.

A very easy breed to look after in terms of grooming, the clue is in the name with the American Shorthair. Their short, smooth coats require just a weekly combing or brushing. Also, while the American Shorthair does tend to shed a little bit, it’s only an average amount. In addition, they should have their teeth brushed daily to prevent any dental problems and nails trimmed as needed – though they should have a scratching post, too, as this is important for their well-being. Ears should also be checked regularly for any debris, wax or signs of infection. Lastly, it is recommended that your American Shorthair has a professional grooming session from time to time.

With their strong hunting instinct, the American Shorthair will take pleasure in chasing anything that moves. As such, it’s best to keep them apart from other smaller pets to avoid any accidents. However, they normally get along fine with other cats and dogs and usually settle in well to life in the domestic home. Because of their natural intelligence and innate hunting skills, American Shorthairs will enjoy having some toys to play with (if these have a ‘hunting’ element to them so much the better or your curtains may become easy prey...). A scratching post will also help to divert them away from the legs of your best table.

All about American Shorthairs

With their short, dense coat, shedding in the American Shorthair cat breed is generally moderate to average. Regular brushing should help to keep stray hairs away from the sofa and carpet. People sometimes assume that because their coat is short, the American Shorthair must also be hypoallergenic – but, in actual fact, there is no such a thing as a ‘hypoallergenic’ cat as the allergen is present in all breeds.