That agile gait, the regal demeanor, those enviable coiffes. You might take Poodles for the supermodels of the dog world; however, there is much more to this very old breed than meets the eye. Once bred for waterfowling, uber smart Poodles are natural athletes and inherently task-oriented. Whether it’s the Toy, Miniature or Standard variety, these top-of-the-class-clever dogs are highly trainable and excel in a number of canine activities, making them wonderful companions and family members. 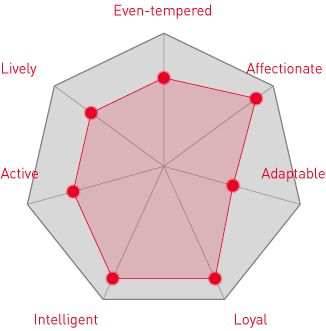 Get to know the Poodle

Sharp-witted, athletic dogs with a natural noble elegance, Poodles are exuberant dogs that come in three sizes – the Toy, the Miniature, and the Standard.

Originally used by European hunters to retrieve game from streams and lakes, Poodles are highly alert, eager to please and task-driven. With an English name derived from the German word for splashing about in water and French name, caniche, that comes from “cane” or female duck, it’s no surprise that these dogs are excellent jumpers and swimmers.

Misconceptions about their disposition are usually based on their distinct “clips” or grooming style, which once had the practical purpose of keeping vital areas warm with longer hair while clipping other areas short to allow for ease of movement in water. Of course, there is also an aesthetic intention behind that eye-catching look, since Poodles have been favoured companions of the fashion-focused for centuries and are regular competitors, read winners, in dog shows.

Poodles are keenly sensitive and adapt very well to people. This combined with their substantial supply of energy means they thrive on attention and commands. With firm training and regular exercise, Poodles make excellent companions that are well-behaved around children and other animals.

Despite being emblematic of all that is French, Poodles actually made their European debut in Germany where they were bred for bird hunting. However, it seems the breed can be traced even farther back in time: images of what appear to be ancestors of the Poodle assisting their masters in various activities have been observed in Ancient Roman and Egyptian artifacts.

It just wouldn’t be fair if these knockout pooches got to be striking, smart, and athletic all with only a short night’s sleep. In fact, Poodles really like their shut-eye, with puppies getting around 15 hours of snooze time per day and adults around 12-13 hours per day. So, don’t be surprised if your Poodle gets in more than forty winks - being this beautiful takes rest!

Theories about the origins of the Poodle include its ancestors travelling to Europe from the Asian steppes with Germanic tribes, or with North African Berbers, making their way to Europe via the Moorish invasion in the 8th century. Whatever the case, Poodles have been around for a very long time.

Established in Germany as a breed used for bird hunting and water retrieval over four centuries ago, the Poodle’s name comes from the German word “pudel” or “pudelin”, meaning to splash around in water. The Poodle’s trainability, athletic prowess and well-proportioned build quickly made them a sought-after breed.

So popular were Poodles that breeders began producing smaller versions – the Miniature followed by the Toy – to accommodate various uses. The French used the standard Poodle for hunting, while tasking the medium-sized Miniature with truffle hunting and the Toy with being a companion to the upper echelons of society.

In 1874, England’s Kennel Club registered its very first Poodle, and the American Kennel Club followed soon after, registering them in 1886. However, the breed didn’t enjoy solid success overseas until after WWII, reaching peak success in the 1950s and enjoying a two-decade run as the country’s preferred pup.

Though German in origin as far as their European presence is concerned, Poodles are widely thought of as the quintessence of French chic and are regular winners at competitions all over the world.

From specific breed traits to a general health overview, here are some interesting facts about your Poodle

Excitement or something more?

Poodles are naturally athletic and highly active, so it isn’t surprising when they take it up a notch and launch into zoomies - that behaviour when they start racing around and around in circles. However, if the running seems more nervous than excited, they might be experiencing a seizure. There are many potential causes for seizures, so a quick trip to the vet as soon as you notice anything unusual will help you catch anything early.

Look out for signs of hip dysplasia

Like many breeds, Poodles can suffer from the genetic disorder known as hip dysplasia, a condition where the femur slides partially out of the hip socket due to the malformation of the latter. Potential signs include decreased movement, “bunny hopping” gait, and or reluctance to run, jump, or climb stairs.

If left unchecked, hip dysplasia can develop into arthritis and, eventually lameness. The good news is, regular X-rays and check-ups with your vet give you a head start in supporting your dog and ensuring best possible care.

Another condition observed in some Poodles, particularly in the Miniature and Toy varieties, is PRA – progressive retinal atrophy. PRA encompasses a range of eye diseases that can cause the retina to gradually deteriorate. An early manifestation of PRA is night blindness, which can sometimes cross over into the day. Remember to ask your vet for a PRA Optigen DNA test, which will help you stay on top of any potential issues.

Caring for your Poodle

As far as training is concerned, Poodles go straight to the head of the class. With their sharp intelligence, athletic predisposition and profound desire to please, Poodles learn fast and love being given a job.

In addition, early training and socialisation helps them channel their abundant supply of energy and curb any predisposition to possessiveness. As they are highly responsive, reward-based training with treats and/ or favourite toys is an excellent approach to teaching them. Poodles enjoy being around people and need a fair amount of exercise. A Poodle that is left alone for long periods of time could turn toward destructive behaviour. Remember, a busy Poodle is a thriving Poodle!

Poodles are a non-shedding breed with thick, curly – even wiry - hair that can be styled to suit a broad range of owner tastes. However, potential poodle owners should know that grooming the breed is a serious commitment that many prefer to outsource to professionals. And because Poodles should be groomed every three to six weeks, this can be a considerable expense. Some owners opt for an easier-to-maintain short clip, but this still requires regular brushing since the hair can quickly become matted.

The upshot is that, because the Poodle has a mostly non-shedding coat , they are a good choice for people with allergies!

Poodles enjoy innate agility and athletic prowess coupled with energy to burn. As such, they should get moderate, regular exercise to ensure good physical health. It is recommended that your Poodle enjoy a minimum one to three hours of exercise a day. Since they benefit greatly from activities, long walks, jogs, retrieving, and swimming are just a few great ways to help Poodles channel all of that energy.

While they are considered “moderate” barkers, Poodles never bark for no reason. Those reasons can include being left alone for long periods of time, passersby, excitement, etc. Luckily, this breed responds extremely well to solid, early training and can learn to stifle that bark.

In a word, yes. While they like to stay active during the days and are independent, an aspect that Poodle owners appreciate about the breed, Poodles have another side to them and are generally up for a good snuggle with their humans when the day is done.

Tailored nutrition for your Poodle

​Caring for your dog in cold weather

How to give a dog a pill with Pill Assist™