Often cited as the world’s most popular cat, Ragdolls are the full package. As well as being an exceptionally beautiful breed, with their huge baby-blue eyes, luscious coats and velvety paws, they are also one of the largest, making them quite the head-turner. Very intelligent animals, Ragdolls are also easy-going, docile and sociable – and affectionate too. Even their name stems from them being so floppy and relaxed when picked up 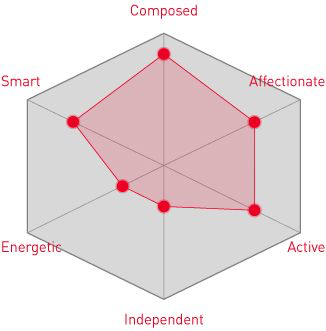 Get to know the Ragdoll

The Ragdoll is a cat that really does seem to have it all. Not only do they have beauty but also brains, too, and a laid-back, affable approach to pretty much everything. The Ragdoll even has a good lifespan, often living well into their late teens.

And yet, as a breed, they have not been around for very long at all. Only developed in the 1960’s, in the United States, the Ragdoll is a relatively new addition to the feline world. In that short time, however, they have become one of the most popular cats of them all.

One of the largest domesticated cat breeds, the female can reach up to 13 pounds (6kg) and the male up to 20 pounds (9kg). Despite the Ragdoll cat’s statuesque size, however, they are not an especially energetic breed, and even quite quiet, so they usually fit in fine to most home set-ups. They are also known for their tolerant attitude towards children and other animals.

As well as their actual size, their fluffy ‘plush’ coat – and the undercoat beneath – can make them seem even bigger than they are. Very varied in pattern, the Ragdoll cat colours can range from chocolate, lilac and cream to seal, blue and a red. However, as a pointed breed, the common theme is that they usually have darker markings on their extremities.

Among the many variations of colour in the Ragdoll cat breed, one of them results in four white feet. So distinctive is the effect that animals with these markings even have their own name: the Mitted Ragdoll.

Often described as more dog-like in their personality, Ragdoll cats exhibit a number of behavioural traits that are more commonly associated with canines. As well as enjoying a game of fetch, they will often follow you from room to room and will even greet you at the front door on your return home.

Hailing from California, renowned for its relaxed and laid-back lifestyle, it’s perhaps no wonder that the Ragdoll cat has such a carefree approach to life. It all began back in the 1960’s when a local breeder called Ann Baker decided to cross her white, long-haired domestic, Josephine, with a seal point male (thought to have been a Birman cross), and also a solid black cat. Interestingly, the animals had all been strays previously.

Whatever the reason, the resulting offspring were so docile in their temperament that Ms Baker decided to try and develop a breed. And because of the way they would go limp when they were picked up, due to being so comfortable with human contact, she decided to name this new variety the ‘Ragdoll’ cat.

Later, in the 1970’s, other breeders – notably Denny and Laura Dayton – developed the breed further. Their aim was to formalise things and get the Ragdoll cat recognised officially. However, it wasn’t until the early 1990’s that the Cat Fanciers Association (CFA) – the largest registry of pedigreed cats – began accepting the Ragdoll, eventually giving them full recognition in 2000.

The Ragdoll cat has certainly made up for lost time though. According to the CFA, they were the most popular breed in the world for 2020. That was also the second year in a row that they scooped the title of ‘Top Cat’.

From specific breed traits to a general health overview, here are some interesting facts about your Ragdoll

It's important to keep a close eye on their weight

Due to their sizeable stature, and long growth period, Ragdoll cats can sometimes experience problems with their joints and bones. Tell-tale symptoms of this are an abnormal gait, obvious limping or more general signs of discomfort. The good news is that problems can be largely prevented from the outset by feeding them a high-quality diet, which supports healthy growth, and keeping an eye on their weight. As always, stick to the guidelines on their food packaging and ensure they have enough daily activity. Also, no unhealthy snacks in-between meals!

They can be prone to mouth problems

Like many breeds, Ragdoll cats can also suffer with gum and dental issues. These tend to occur when plaque on the surface of the teeth is allowed to build up. This can induce an inflammatory reaction at gum level (gingivitis) – and, if it develops into tartar, this can result in an inflammation of the tooth’s support structures (periodontal disease). Symptoms can include red gums, pain and bad breath – and, in severe cases, the resulting toxins can cause damage to the organs. As always, prevention is better than cure, so daily brushing and regular check-ups are key. Also, feeding your cat a special dental diet can certainly help. The action of the kibble rubbing against the teeth will remove some of the plaque and calcium chelators will prevent the formation of tartar.

And they can be predisposed to a heart condition

Ragdoll cats are among the breeds genetically prone to something called ‘hypertrophic cardiomyopathy’. This is a heart condition that occurs independently of other cardiac or systemic disorders and causes a thickening in the walls of the ventricles. The impact on the normal cardiac function varies, but affected cats may develop problems ranging from exercise intolerance to a more serious prognosis. As always, forewarned is forearmed, so have a chat with your vet. Diagnosis can be done using various techniques and a DNA test is also available. In addition, if you are thinking of getting a Ragdoll kitten, be sure to ask for the parents’ health certificate.

Your vet may also discuss your Labrador’s weight management as a preventive measure. These simple tools can help you stay on top of potential problems.

Caring for your Ragdoll

When it comes to exercise, it’s important to get the balance right with Ragdoll cats. On the one hand, their large size means they do need to have a moderate amount of daily activity and also to keep their weight in check. On the other, Ragdolls aren’t the most agile animals and can be a bit uncoordinated at times. So, if you decide to invest in a cat tree, for example, it’s important to go for one that has wide steps and is not too high. Providing plenty of opportunities for active play at ground level is generally the best way to keep them in shape. One other thing to bear in mind with the Ragdoll cat is that it can be hard to spot an expanding waistline under their thick coat. So, you may wish to pop them on the scales from time to time. True to their name, they won’t mind.

It may come as a surprise that Ragdoll cats don’t reach their full size and coat development until they are up to four years old. When they do, the adult Ragdoll cat has fur that is luscious and thick with a silky texture that is sometimes compared to that of a rabbit. As they have little undercoat, this means they are less prone to matting, but they still need brushing or combing at least once or twice a week to get rid of any dead hair. This is especially important during the Ragdoll cat’s shedding season. One question that often comes up is how to get knots out of a Ragdoll cat’s fur. The trick is to work it out gently using a wide tooth comb and, if required, use a tiny bit of coconut oil to loosen things up. But they will need a bath afterwards! Beyond that, ears should be checked regularly, nails clipped as needed and teeth brushed daily if you can manage that.

Given the breed’s gentle nature, Ragdoll kittens will always respond best to positive reinforcement. Highly intelligent animals, they will soon get the hang of the litter tray and scratching post etc. Also, depending on the personality of your Ragdoll cat, some can even learn how to play games such as fetch. They are also a good choice of cat if you happen to have other animals, as they usually get along fine with other household pets. However, their trusting nature means they should be introduced with extra care to any existing cats or dogs, who might not welcome a stranger on their territory. For that same reason, and also because they can have a slight tendency towards clumsiness, owners sometimes choose to keep Ragdoll cats indoors.

The Ragdoll cat doesn’t reach full maturity until they are four years of age and the normal life expectancy is 12 to 17 years. This means the average Ragdoll lifespan is around 14 to 15 years. However, with the right diet and good veterinary care, they can sometimes go on to live well beyond that.

Just the one, but the Ragdoll cat colours are very varied – ranging from red, seal and chocolate to blue, lilac and cream. In other fun Ragdoll cat facts, the ‘seal point’ is the most popular colouring. There are also various different patterns too. But just one breed of cat.