Call him Mr. Popularity. The celebrated German Shepherd Dog is one of the most universally sought-after breeds, praised for their high intelligence and unflinching loyalty. A wonderful family pet, the German Shepherd is very obedient, which makes them easy to train, and they have a great time doing it. The added bonus:  those bright eyes coupled with stunning markings. 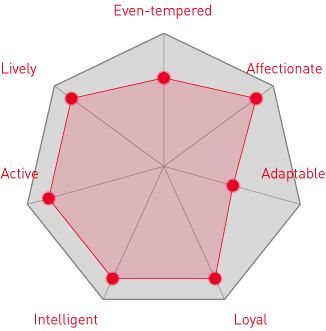 Get to know German Shepherd

An intelligent, lively, and steadfast breed, the German Shepherd fulfills so much that’s wanted in a dog. Devoted to their owner and to their family, this is a dog who will follow you from room to room, into the car, really anywhere you go.

The energy level of the German Shepherd? High. But that can also equate to fun, as the breed looks upon any activity as welcome activity. Walking, running, all work for the German Shepherd, as do tracking and agility competitions, which they excel at.

If there’s one characteristic that defines the German Shepherd, it’s their smarts. They are known for having incredibly high intelligence and the ability to figure things out - part of the reason, along with their faithful nature, that they’re often used by armed forces.

Because of their very high intelligence, the German Shepherd dog is also used widely as a service dog for disabled or visually impaired persons. They’re ideally suited for the role given their unwavering loyalty, smarts, and keen sense of smell.

Train them well and this breed will return your requests in spades. As singularly self-assured as they are, the breed is also known to be a great companion dog. They are incredibly bonded to their owner, so teaching your German Shepherd won’t be hard, it just needs to be consistent.

The other breed hallmark:  that coat! It’s a double one, and composed of thick, plush fur dappled with distinctive, rich colorings that give the German Shepherd breed their regal look.

1. An incredible sense of smell

The German Shepherd breed is one of the leaders in olfactory abilities - that means smell. They are traditionally used to perform search and rescue, and for bomb and drug sniffing in police and military work because of this keen characteristic.

Bred as a herding dog, the German Shepherd is known for rounding up not only other animals but even humans. They’ll nudge you with their nose - when they want to go out, go for a walk, or when it’s mealtime. It’s a charming and harmless trait, and could be handy where little ones are concerned as the German Shepherd tends to be highly protective, too.

Even-keeled and and loyal to a fault, the German Shepherd temperament reflects the careful breeding done by Captain Max Frederic Emile Von Stephanitz in Germany starting in 1899. Von Stephanitz wanted to produce a superior herding dog, particularly for sheep, so brought together sheepdogs in southern and central Germany. The goal was a dog with high intelligence and athletic ability. The “Shep-herd” was born.

Von Stephanitz then founded a club for the breed in Frankfurt in 1899. The breed developed a keen obedience in the ensuing years, becoming increasingly used for security, especially by the military and police, who still widely employ the German Shepherd today. And the public has joined their ranks: The German Shepherd gained huge popularity in the early Twentieth Century in the U.S. as a result of dog movie stars Rin-Tin-Tin and Strongheart. The breed is highly popular worldwide - in the top ten of U.S. breeds for the past ten years according to the American Kennel Club, and usually only second after the Labrador Retriever.

From specific breed traits to a general health overview, here are some interesting facts about your German Shepherd

A strong breed with a touchy stomach

When it comes to health, German Shepherds can have occasional bouts of digestive tract disorders and diarrhea, not life-threatening but nonetheless no fun for the dog. Look for adverse reactions to food, diarrhea or loose stool, gastroenteritis, pancreatic insufficiency, bloat, or IBD, among other disorders. Allergic dermatitis, or skin irritation, can also occur. Feeding your dog highly nutritious food will keep them on track. A proper diagnostic workup is mandatory, which can be time - and money - consuming. A good veterinarian can help you find solutions.

Hip dysplasia is the third top illness for the German Shepherd - in fact, they are predisposed. It is a developmental syndrome of the ball and socket joint where the thigh bone and the hip bone don’t quite conform. The result is arthritis. It’s important that the rate of growth, especially for large-breed dogs, stay constant so their bones and muscles develop together. Dysplasia can happen more often when muscles grow faster, thus putting stress on bones and joints, potentially causing arthritis and then dysplasia. A simple veterinarian check for your German Shepherd can find signs of any occurence.

Forewarned is forearmed: The German Shepherd dog is an extremely high energy breed. It’s exciting to think about adding this gracious canine to your home, but they are not the breed for everyone. They thrive on a lot of daily exercise - so much so that the German Shepherd will easily accompany you on long runs, trotting alongside for hours.

Like all breeds however, the German Shepherd can suffer from health issues when some of their physical features are over-exaggerated, in their case, a sloped back. The feature came from developing the dog for shows, breeders thinking an elegant line and shortened legs made for a bouncy gait when the dog moved through the show ring. We advise you to seek counsel from your veterinarian where needed to always obtain a dog from a responsible breeder.

Caring for your German Shepherd

German Shepherds and exercise go hand-in-hand. They require a large amount of daily activity as a highly athletic and high-functioning dog. Great runners - alone or with humans - they can go long distances. Herding, tracking, or agility exercises are also excellent for the breed who is often a competitor in these kinds of contests, not to mention working dog competitions and dog shows of all kinds.

German Shepherds have a double coat - a slightly thick coarse outer coat with a soft undercoat. Brushing twice a week is best. Despite their high athleticism, German Shepherds don’t need baths too often. Typically, long-haired breeds do shed, but less so if brushed regularly. Shedding will happen twice a year, to make way for the new fur. Nail trims should be done monthly however a dog that walks on hard surfaces will rub down his nails and subsequently they won't need clipping as frequently.

A highly trainable breed, German Shepherds have a personality that responds well to direction and commands. They very much want to please, and it’s no exaggeration to say they’re incredibly intelligent, a great combination when it comes to shaping them into a superb companion. It’s recommended to start training very early on, as German Shepherds are always in search of a task. They are highly bonded to their human family members.

All about German Shepherds

The breed makes an excellent family pet once trained since they are incredibly loyal and bonded to people. The German Shepherd needs a job to do so responds well to commands. They are willing to go on walks or runs anytime, and tend to be very kid-friendly and protective. Their high intelligence makes them obedient to boot.

Not at all. German Shepherds are an affable breed and respond hugely well to any direction. This very active breed always wants to work so will never be bored - as long as you know how to keep them busy. They require a serious commitment from an active owner, but are a pleasure to have. Any health issues for your German Shepherd can be headed off with proper care.

Tailored nutrition for your German Shepherd

Finding the right dog breed for me